Solomon “We Need Safer, Better-Designed Streets To Not Just Create A More Pedestrian-Friendly Downtown That Is Safe For Families But Also Builds A More Resilient Jersey City.”

James Solomon said: “We need safer, better-designed streets to not just create a more pedestrian-friendly downtown that is safe for families but also builds a more resilient Jersey City. We’ve made a lot of progress over the last four years improving our streets and my plan will build on that success to create a livable downtown that is easier to get around, cleaner and safer.”

Solomon’s plan builds on his existing advocacy and has three priorities, they are:

Since taking office, Solomon has made real safety improvements to downtown streets. This 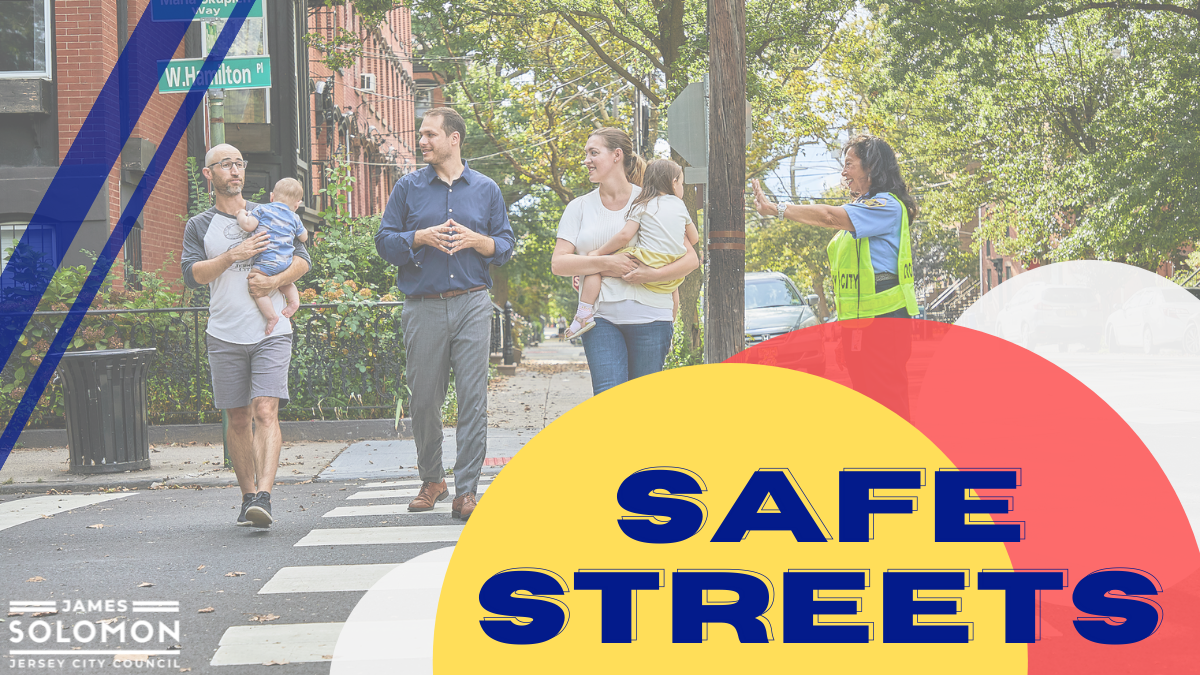 With miles of waterfront, parks and walkable communities, Jersey City is a pedestrian city. That’s why it was unacceptable that four years ago, our city streets were so unsafe that our city averaged 300 major crashes and nine deaths a year. When I was first elected in 2017, one of my core missions was to bring this unacceptably high level of traffic fatalities down, and keep them down. And for the last 4 years, that’s been exactly what I’ve done. Our goal is “Vision Zero:” bring traffic fatalities on Jersey City streets down to zero.

Simply put, we need to be better about creating safer streets that are easier to get around, while also creating a more environmentally resilient city. That’s why my safe streets plan, in addition to pedestrian safety, my streets policy calls for the installation of green infrastructure and better traffic enforcement. The plan has three top priorities:

The residents of Jersey City deserve safe streets. Four years ago, our city averaged over 300 major crashes and nine fatalities annually. That is unacceptable, and I am proud to partner with the administration to adopt “Vision Zero,” moving Jersey City to the goal of zero traffic fatalities on our roads. That required street safety redesigns that prioritize safety.

Now, we must build off the safety redesigns of the last four years to complete safety renovations and street redesigns on all major roads in downtown. These include: 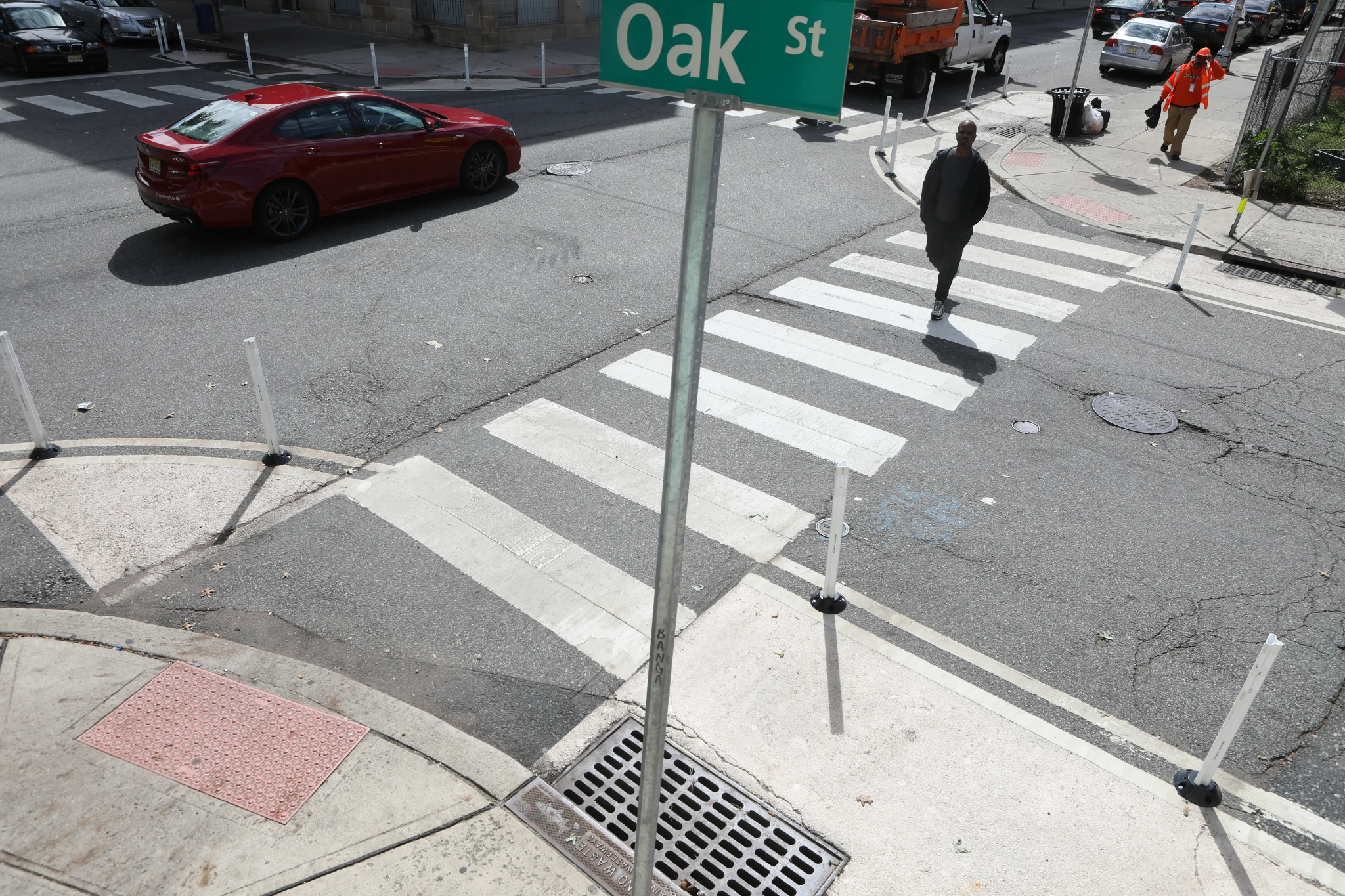 Fixing unsafe intersections must be a priority, and we can do this while also making our city more resilient to climate change at the same time by installing rain gardens at unsafe intersections. As you can see in the picture to the right, pedestrian bump outs can improve sight-lines for pedestrians and drivers as well as slowing the speed of cars. We’ve installed dozens of these bump outs in downtown, prioritizing the neighborhood’s most dangerous intersections. 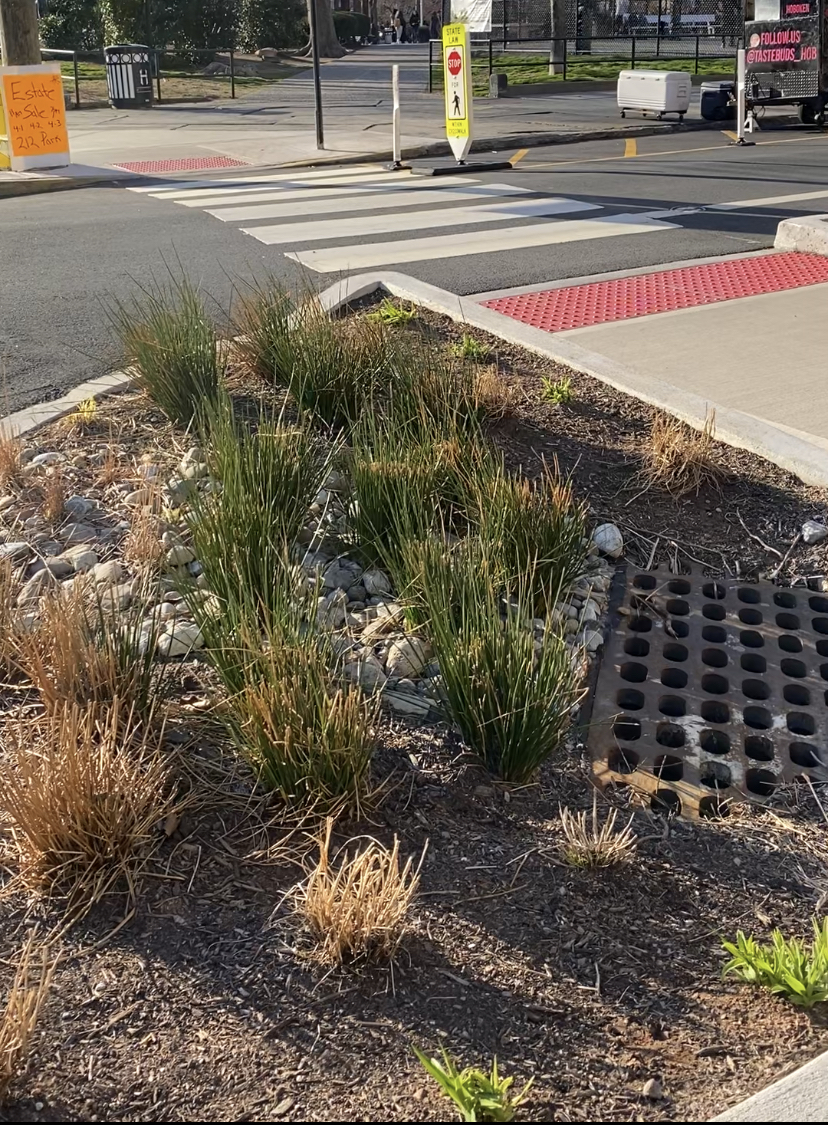 However, the current bump-outs, with white sticks and beige paint, are ugly. We can beautify our neighborhoods by turning them into rain gardens (pictured left). By adding more permeable surfaces, these gardens serve as sponges that soak up excess stormwater runoff. That keeps the untreated rainwater out of sewers, basements, and rivers. Why is stormwater runoff such a problem? In cities like ours that are mostly pavement, instead of being absorbed by the ground, excess rain water will pick up contaminants like oil, pesticides, dirt, bacteria and other pollutants which then flow untreated into our streams, rivers and the ocean. Like the EPA recommends, “when we take action to soak up the rain, we keep rain closer to where it falls and reduce the runoff from our roofs, driveways, and parking lots. Reducing runoff can help prevent water pollution, reduce flooding, and protect our drinking water”.

Furthermore, they reduce ambient heat from the surrounding blacktop and pavement, lowering the local temperature. With climate change causing more extreme weather events every year, Jersey City must ensure we build green infrastructure to adapt to climate change and start making investments in our futures now. Raingarden bump outs provide a relatively cheap solution to do exactly that. Green infrastructure like these bump outs don’t only just collect excess water, but deliver a long list of other environmental, social, and economic benefits too. Improved drinking water and air quality and habitats for local plants, animals and insects are just the tip of the iceberg. Green infrastructure also saves the city, and the taxpayer, money by reducing frequent flooding and makes our neighborhoods greener and more livable. If we are going to build our city for the 21st century, it starts with sustainable and climate conscious investments like these.

A New Unarmed Traffic Enforcement Unit of the JCPD

Downtown residents rightly complain about our city’s lax traffic enforcement. Stop signs and speed limits seem optional for drivers. Many tell me that in decades living downtown, they have never witnessed a car pulled over for speeding or any other traffic violation. This is just an unsafe situation.

To solve that problem we must create a dedicated unit of the JCPD whose sole responsibility is to keep our roads safe. At the same time,  that unit must not create unsafe interactions between police and community members.  Hence, following the lead of cities across the country, we will ensure the unit is unarmed and staffed by Class One and Class Two Special Officers as defined by state law.

Last year, Berkey, California voted to become the first city in the nation to remove regular police from conducting traffic stops as part of a comprehensive plan to reimagine public safety, and reduce problematic interactions stemming from routine traffic stops. Similar efforts are gaining steam across the county in cities large and small, from Austin, Texas to Brooklyn Center, Missesota.

Why is action on this so urgent, and why should Jersey City follow suit? One reason is that study after study has found that drivers of color are as much as 20% more likely to be pulled over for a traffic violation than white drivers. Other academics have found traffic stops usually escalate to violent encounters only after police invoked their authority beyond asking for basic information or documents. “Common examples included ordering motorists out of vehicles, touching or handcuffing drivers or passengers, reaching inside the vehicles, telling drivers or passengers that they were under arrest, or asking for permission to search the vehicle or its occupants.” We can avoid these types of situations by taking cops out of the business of routine traffic enforcement. You can read more about how we can reduce police encounters without compromising public safety here.