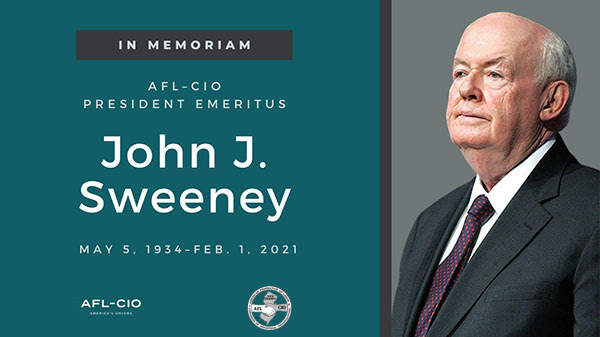 New Jersey has lost a loyal friend and a well-respected visionary leader with the passing of John J. Sweeney, national AFL-CIO President Emeritus.

President Sweeney died on February 1, 2021. He was 86. He served as national president of the AFL-CIO from 1995 until 2009, revitalizing the labor federation’s commitment to organizing, collective bargaining, political advocacy, diversity and equality, and social justice.

“I don’t have the words to express how great a friend to us John was,” New Jersey State AFL-CIO President Charles Wowkanech said. “He always supported our programs in New Jersey, especially our Labor Candidates Program. He loved spending time with our rank-and-file brothers and sisters on his many trips here.”

“He was such an inspiration,” New Jersey State AFL-CIO Secretary-Treasurer Laurel Brennan said. “He was a visionary leader, ahead of his time when it came to inclusion. And he was a humble man who was a champion for working families.”

“John Sweeney was a true trade unionist who created a real unity in our Labor Movement,” President Wowkanech said. “We will miss him greatly, and we offer our deepest condolences to his wife, Maureen, and his children and granddaughter.”