TRENTON, NJ, MARCH 9, 2021 — When New Jersey’s legislature tried to codify the ABC test in the 2019-20 session, large and small businesses responded with an uproar. California enacted a similar bill in January 2020, and the result was widespread income loss and economic devastation to thousands of independent contractors, from court reporters to musicians. The US House of Representatives is voting today on the PRO Act, which includes the same regressive ABC test as the New Jersey and California legislation. Fight for Freelancers New Jersey, a nonpartisan, grassroots group of independent contractors, creatives and businesses, demands that federal legislators vote no on the PRO Act as long as it contains the ABC test.

“It was disappointing to see that all of New Jersey’s federal legislators co-sponsored the PRO Act, and none introduced amendments to remove the 1930s ABC Test that we fought so hard to defeat in Trenton,” says Kim Kavin, a Fight for Freelancers New Jersey co-founder and freelance writer in Long Valley, NJ. “Covid-19 already took away a lot of jobs, and ruined many small businesses. And now our elected officials want to harm our livelihoods even more? Really?”

The ABC Test in the PRO Act is a list of three oversimplified criteria created in the 1930s to determine whether someone is an employee. California’s ABC Test law did not create jobs or increase union membership; instead, it outlawed most independent contractor work in that state. More than 100 professions have received exemptions, with more exemption bills still in the works.

“It’s baffling how legislators think it’s OK to use a narrow, outdated test to classify workers, when the majority of people who will be affected are small businesses like mine,” says Jen Singer, a Fight For Freelancers co-founder and freelance writer in Red Bank, NJ. “It was bad enough to fight this terrible legislation in the Garden State, and to continue to watch our friends in California suffer. To see our federal elected officials championing this same idea a year later at the national level is a betrayal of the people they serve.” 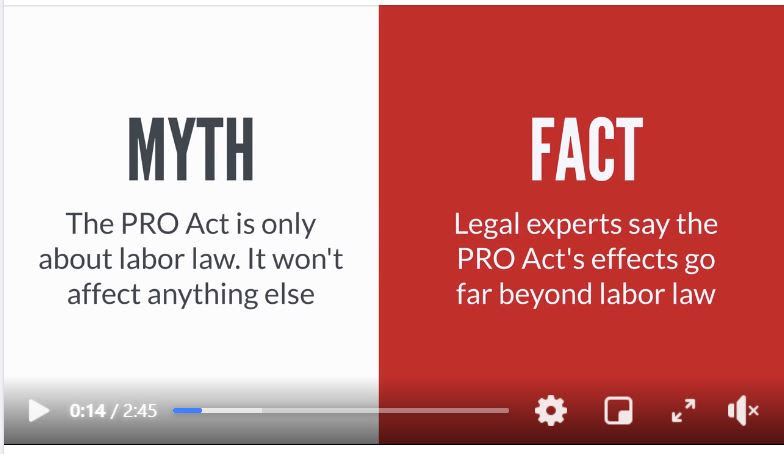 “We call on our New Jersey representatives to vote no on the PRO Act when it comes up for a vote today,” Kavin says. “The bill is being rushed through for a vote, and did not receive any committee hearings or testimony this session. A bill of this magnitude should not be pushed through the House 13 days after it was announced that it was going to a vote. This smacks of what happened during the lame-duck session in New Jersey a year ago: Lawmakers doing the bidding of special-interest groups and hoping that if they do it fast enough, nobody will notice.”