NEW JERSEY — After months of action by immigrant rights organizers, the Elberon Development Group has decided to cut ties with their tenant, CoreCivic and their property, the Elizabeth Detention Center (EDC), a private immigration detention center that has a long history of inhumane conditions. Advocates continue to press for the immediate closure of the EDC and the immediate release of all people detained there, for Elberon to establish a reparations fund from their rental profits for the individuals and families of those who have been detained at EDC, as well as the release of people from all detention facilities.

Following a series of protests outside the Elizabeth Detention Center and weekly calls to Elberon Chairperson Anne Evans Estabrook and President & CEO Dave Gibbons from concerned local residents that had previously been met with silence, on July 14, 2020, the Elberon Development Group sent an email to those who had raised concerns, stating that “As supporters of many important educational, social service and religious organizations in the community, we want our values mirrored in our work” and thus have “shared with Core Civic our plan to end our relationship.” [Full email below]

“This is a victory for the grassroots, but we will not stop until people are released from detention. One email cannot erase the pain of thousands of separated families over the course of 25 years. Elberon did not need us to tell them that their collaboration with ICE through their business relationship with CoreCivic was wrong.” says Kathy O’Leary, NJ region coordinator of Pax Christi.

“Elberon’s move toward accountability is a good start,” says Whitney Strub of North Jersey DSA, “but the layers of complicity with Trump and ICE run deep in New Jersey, from Democratic county governments that contract with ICE to Prudential Financial in Newark, a major shareholder in the private prison and detention center industry. We say #NoBusinesswithICE or its affiliates anywhere in this state.”

Amidst the COVID-19 pandemic, Elizabeth Detention Center, along with immigrantion detention centers, jails, and prisons across the country, has come under increased fire for unsanitary conditions, lack of sufficient testing and proper PPE for people who are detained as well as workers, and the widespread threat of sickness and death from the virus. After more than a dozen people contracted the virus in the prison and an employee for CoreCivic passed away, American Friends Service Committee, Immigrant Defense Project, NYU Immigrant Rights Clinic, and Faegre Drinker Biddle & Reath LLP partnered with people held in Elizabeth to file a lawsuit demanding their release. ICE swiftly retaliated against one of the plaintiffs, Héctor García Mendoza, deporting him to Mexico, where he has not been heard from since. ICE continues to send people to Elizabeth Detention Center, and roughly 80 people remain trapped in the windowless facility according to the most recent legal papers ICE filed in the case, which is pending before Judge Esther Salas in the District of New Jersey.

“While Elberon Development’s actions are a powerful first step, we cannot rest until immigration detention is abolished in New Jersey and throughout the United States.” says Serges Demefack, End Detention and Deportation Project Coordinator at American Friends Committee. “We must ensure that the closing of one facility does not mean people are simply transferred to another. Elberon Development must cut all ties with the prison industrial complex and the unjust immigration system and proactively support efforts to #FreeThemAll. It is not enough to oppose CoreCivic’s operations on their property in Elizabeth, we are asking them to stand on the right side of history as vocal partners in the call to shut down prisons and detention centers across the country.”

“Elberon’s decision to terminate their relationship with CoreCivic demonstrates the impact of our collective power.” says Tania Mattos, Policy and Northeast Monitoring Manager at Freedom for Immigrants. “We will hold Elberon to their word and won’t stop pushing until the immigrant prison at Elizabeth is completely closed. In the meantime, we must make sure people detained in Elizabeth are not transferred or deported during a global pandemic and are instead released so they can safely shelter in place with their families. We trust that the federal court will act quickly to ensure that the rights and wellbeing of the people imprisoned in Elizabeth are protected.”

“Now in my 80s, I’m living in a priests’ retirement home, yet I recall starting some 25 years ago protesting outside the Elizabeth Detention Center,” Fr. Jack Martin, a now-retired priest in the Roman Catholic Archdiocese of Newark says. “As a minister and an American, I knew so well we should be welcoming our sisters and brothers as the poem on the Statue of Liberty proclaims. As a missionary and an organizer, I have seen what life is like in Central America and Haiti. So many flee for their safety and the future of their children. How can we put them in cages and prisons? If Elberon is serious about the ending of the contract, I say bless you. Praise God!”

“We are glad to hear that Elberon has decided to end their contract with Core CIVIC and stop profiting from immigrant’s lives,” Rosa Santana, Program Director at First Friends of New Jersey and New York says. “We do ask that Elberon give back to the community that they have taken so much from. So many friends have been detained in horrendous conditions in this facility; Elberon should have never had a contract with Core CIVIC and allow so many families to suffer and be separated.  We also would like to see a humane released plan for those who are currently detained at EDC and for friends not to be sent farther away from their families. ICE detention should be abolished!”

Advocates have long called for the closure of the Elizabeth Detention Center as well as other private and government-run detention centers. As dangerous, unsanitary conditions and protocols have caused people at Elizabeth to suffer from COVID-19, four people at imminent risk of serious illness and death from the virus filed a class-action lawsuit on May 15, 2020 demanding the immediate release of all immigrants locked up in EDC. Groups including Freedom for Immigrants offered testimony.

In recent years, CoreCivic has become infamous for running for-profit immigrantion detention centers and caging people in inhumane, abusive conditions. In 2017, CoreCivic received $135 million in federal funds for immigrant detention. The Elizabeth Detention Center has had a long history of jailing people in inhumane conditions, going back to a 1995 uprising of people who were detained, a year after the converted industrial warehouse opened, as detailed in the New York Times article “Detention Jail Called Worse Than Prison.” Under CoreCivic’s management, the prison has continued to harm immigrants, 85% of whom are Black and/or Latinx. The 2007 death of Boubacar Bah and the 2011 death of Victor Ramirez-Reyes exposed a pattern of medical abuse and neglect at the facility. In 2019, the terrible conditions at Elizabeth led several members of Congress, including New Jersey Congressman Frank Pallone, to visit the facility. Since then, however, there has been no government action to address the conditions or release people from Elizabeth Detention Center. 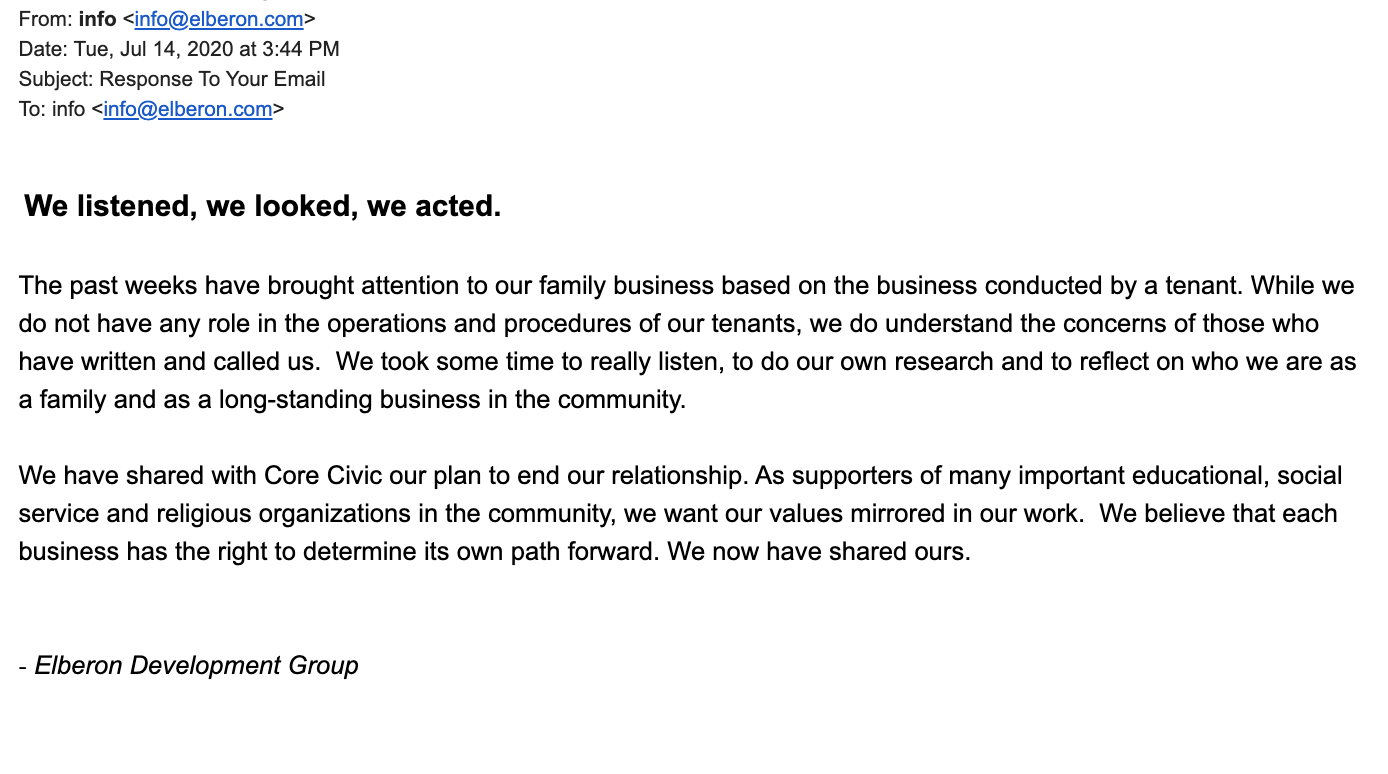 We listened, we looked, we acted.

The past weeks have brought attention to our family business based on the business conducted by a tenant. While we do not have any role in the operations and procedures of our tenants, we do understand the concerns of those who have written and called us.  We took some time to really listen, to do our own research and to reflect on who we are as a family and as a long-standing business in the community.

We have shared with Core Civic our plan to end our relationship. As supporters of many important educational, social service and religious organizations in the community, we want our values mirrored in our work.  We believe that each business has the right to determine its own path forward. We now have shared ours.