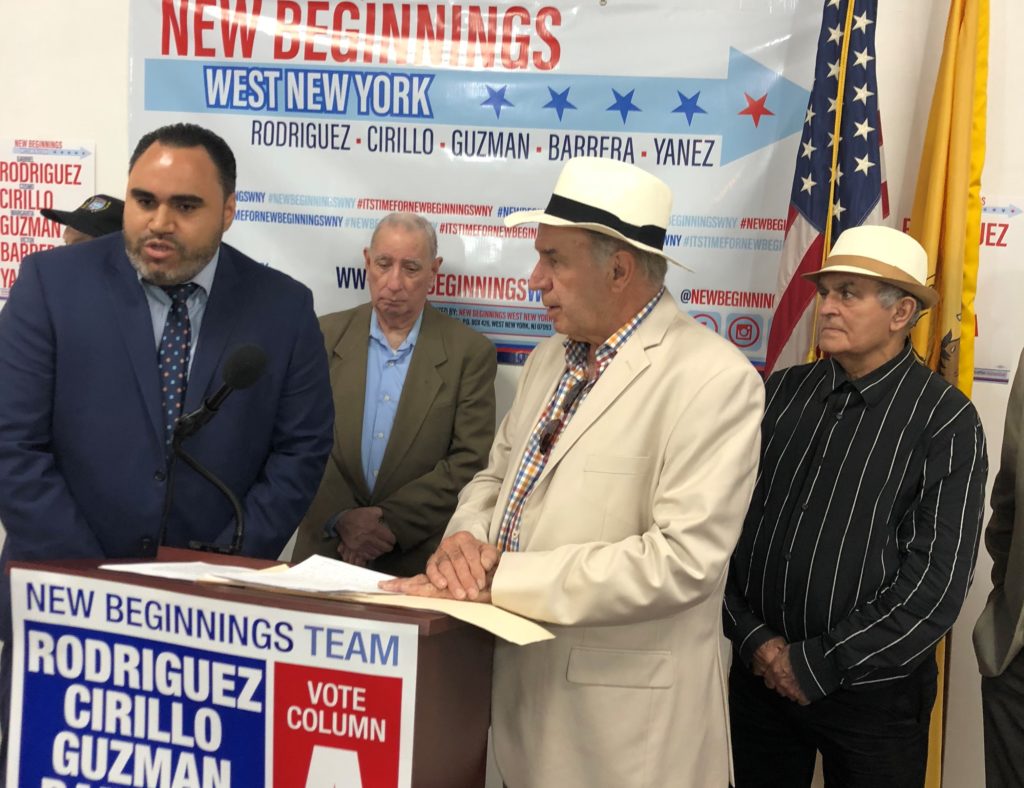 WEST NEW YORK – Angel Alfonso Aleman was only 19-years-old when Fidel Castro’s revolution stormed into Cuba in 1959. Proudly reflecting what must have been the unbridled confidence of youth, Alfonso Aleman says he was so unimpressed with Castro that he and his associates took to the countryside to make plans to kick out the revolution with one of their own.

The group was captured and many of its members killed. Alfonso was thrown in jail for 20 years,. He was released in 1979 and made it to West New York, which by then had become a center of Cuban immigrant life in New Jersey, if not the United States.

Alfonso says he learned all about abuse of power while in Cuba. But oddly, he said he was not all that familiar with political retaliation.

ow he said he is, thanks to Hudson County politics and West New York’s mayoral election.

An 18-year employee of West New York’s DPW, Alfonso said he was reprimanded, demoted and eventually suspended from his job as a supervisor for removing the mayor’s campaign sign last week from a pole near the incumbent’s headquarters at 53rd Street and Palisades Avenue. Alfonso said he had no choice, noting that it’s illegal to put campaign signs on public property.

That it is, but as anyone who drives around New Jersey at election time soon realizes, this is not a law that is universally enforced.

Felix Roque and his five-person slate are in a tough fight to win re-election in the West New York mayoral race, as they face a slate headed by Gabriel Rodriguez. Voters will pick five commissioners in an election that takes place May 14. The Rodriquez slate, which calls itself  New Beginnings, staged a press conference Monday featuring Alfonso and a small group of other immigrants who have spent time in Cuban prisons. One man said he was a veteran of the Bay of Pigs, that ill-fated CIA-led invasion of Cuba that occurred 58 years ago this month.

This was an impressive group.

Rodriguez said Alfonso was punished for doing his job, which he called “beyond unjust.”

Alfonso, who is a very young looking 79, said he was demoted to operating a street sweeper and then suspended. He said his union told him to keep showing up each morning to “clock in.” But it’s not clear if he is being paid.

Obviously, there is nothing new about municipal employees allegedly being harassed around election time. Still, in a city where many residents are Cuban, this is the type of story that can resonate with voters.

Keep in mind that the mayor fled Communist Cuba as well.

Roque was not immediately available for comment, but a man at the mayor’s campaign headquarters laughingly disputed Alfonso’s version of events.

A few hours after the press conference, the mayor fired back.

In a statement, Roque said the New Beginnings slate has no “real issues,” so it is trying to make Alfonso’s plight a issue.
To the mayor, the real issue is that Alfonso is “intentionally refusing to work.”  He explained that Alfonso was asked to operate something known as the “Green Machine” and that he refused to so so. That, Roque says, is insubordination.
The mayor disputed that Alfonso was “demoted,” saying that he had been – and remains – a laborer.
What’s more, Roque contends that Alfonso has been observed removing campaign signs from private property. not public street signs and poles. In fact, the Roque camp provided a copy of a police complaint alleging precisely that. The complaint was filed by Francisco Torres, the mayor’s campaign manager.
Clearly, the campaign is heating up. But notwithstanding the battle of the moment, Roque in a phone conversation Monday afternoon played down any growing animosity in the face of a common, although now deceased, enemy.
Speaking of Alfonso, the mayor said, “Anybody who hates Castro is a friend of mine. And deep down, he hates Castro.”
(Visited 1,822 times, 1 visits today)
Article Tags: